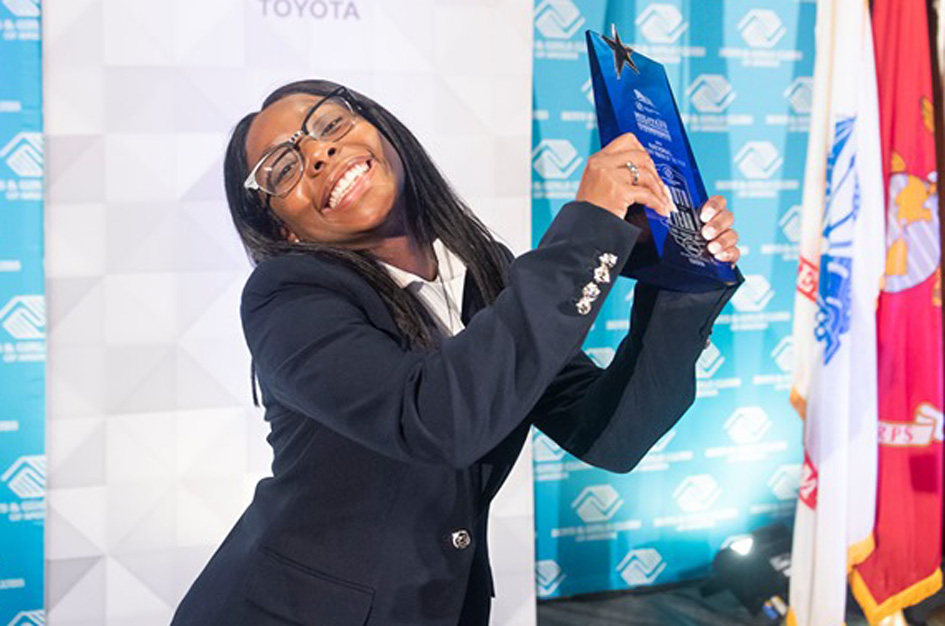 WASHINGTON, D.C., - AUGUST 27, 2019 – Boys & Girls Clubs of America named Dasia B. as the 2019 National Military Youth of the Year in a ceremony held at the National Press Club in Washington, D.C. The NSA Norfolk Naval Shipyard Youth Center teen will receive a $20,000 scholarship and serve as Boys & Girls Clubs of America's official advocate for military-connected youth across the country and abroad.

To earn the National Military Youth of the Year honor, BGCA-affiliated Youth Center teens who served on military installations worldwide advance through local, state and regional competitions—demonstrating how they have made outstanding contributions to their family, school, community and Boys & Girls Clubs of America-affiliated Youth Center while overcoming personal obstacles. Dasia was one of six regional finalists selected to vie for the national honor out of more than 530,000 military-connected youth served by Boys & Girls Clubs.

“We’re so excited to welcome Dasia as the 2019 National Military Youth of the Year and to have her represent the youth Boys & Girls Clubs serves across the nation and abroad,” said Jim Clark, president and CEO of Boys & Girls Clubs of America. “Like Dasia, military youth and their families face unique challenges. We are so honored to provide support to our brave servicemen and women by providing a safe place for their kids and teens to achieve a great future.”

As a military child, Dasia experienced difficulties like making and maintaining friendships because kids were constantly moving in and out of her school, taking on family responsibilities that others her age wouldn’t and watching her father deploy several times throughout her life. To give Dasia some stability, her mother signed her up to be a member at NSA Norfolk Naval Shipyard Youth Center at age six.

Dasia really took advantage of the programs offered at the Youth Center. When she was 13, she became a Counselor in Training (CIT). As a CIT, Dasia assisted with administrative duties, supervised the younger children and assisted adult staff in planning activities. In addition, she helped tutor Club members through the Power Hour homework help program and she served as the vice president in her Keystone Club, Boys & Girls Clubs of America’s premier teen leadership program.

“Because of the NSA Norfolk Naval Shipyard Youth Center, my life changed forever,” Dasia said. “My youth center has always been a safe house for me to express myself and be myself with no judgement. Because of the caring mentors and leaders at the Club, I was exposed to numerous opportunities that developed me into the leader that I am today.”

Dasia plans to attend the University of North Carolina – Chapel Hill to study to become an orthopedic surgeon.

The Youth of the Year recognition program is presented by The Walt Disney Company, who has supported Boys & Girls Clubs of America for more than 50 years, empowering young people to reach their full potential and providing youth with access to the tools they need to build the great futures they imagine. Toyota, Signature Sponsor of Youth of the Year, is dedicated to inspiring the next generations of engineers, thinkers and leaders who will help drive the American economy.

For more information about the Youth of the Year program, visit www.youthoftheyear.org.


About Boys & Girls Clubs of America
For more than 150 years, Boys & Girls Clubs of America (BGCA.org) has enabled young people most in need to achieve great futures as productive, caring, responsible citizens. Today, more than 4,600 Clubs serve over 4.7 million young people through Club membership and community outreach. Clubs are located in cities, towns, public housing and on Native lands throughout the country, and serve military families in BGCA-affiliated Youth Centers on U.S. military installations worldwide. They provide a safe place, caring adult mentors, fun and friendship, and high-impact youth development programs on a daily basis during critical non-school hours. Club programs promote academic success, good character and citizenship, and healthy lifestyles. In a Harris Survey of alumni, 54 percent said the Club saved their lives. National headquarters are located in Atlanta. Learn more at Facebook and Twitter.