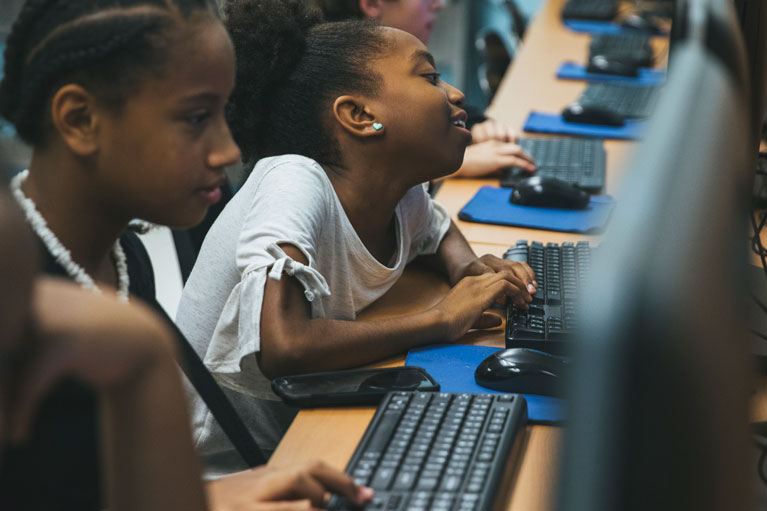 “I learned computers only do what you tell them to do. I thought computers were smart, but it’s people that are smart.” — Alsyiana, Boys & Girls Clubs of Fort Wayne, Indiana

At Boys & Girls Clubs, strong female leaders aren’t born, they’re made. To inspire young women like Alsyiana to realize their potential, Boys & Girls Clubs of America is proudly partnering with Microsoft to provide girls and young women opportunities to become the big thinkers, coders, explorers, engineers and problem-solvers we need. These are the faces of STEM’s future.

Girls and young women are not well represented in pursuing science, technology, engineering and math educations or careers. The gender disparity has sparked debates on the underlying reasons. Some attribute the gap to social factors, the lack of mentors and general unawareness of educational and career opportunities technical field offer. Others point to studies indicating girls and young women often think of computing as “boring” or “only for boys.” Consequently, many of them don’t even consider pursuing an education or career in STEM fields.

In the Microsoft research report “Closing the STEM Gap,” Dr. Shalini Kesar, Associate Professor of Information Systems at Southern Utah University writes, “Despite the high priority placed on STEM and computer science education across the United States, the fact remains that only a fraction of girls and women are likely to pursue STEM degrees and careers. The U.S. Bureau of Labor Statistics predicts that technology professionals will experience the highest-growth in job numbers between now and 2030. Failing to bring the minds and perspectives of half the population to STEM and computer science fields stifles innovation and makes it less likely that we can solve today’s social challenges at scale.”

In 2015, Microsoft and BGCA teamed up to power our Computer Science Pathway, a series of programs that meet Club youth and staff at respective levels of ability, from coding basics to app development. Our partnership with Microsoft has contributed to changing perceptions among Club youth – especially girls.

Ultimately, providing girls and young women to engage with technology is vital to their long-term success. Together, Microsoft and BGCA will continue to provide them with opportunities to pursue STEM- related educations, successful careers, and productive, fulfilling lives.