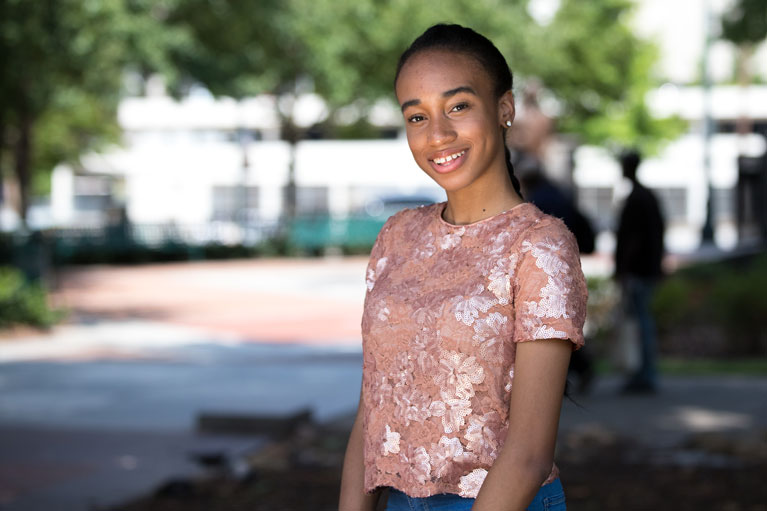 Bullying can be difficult to deal with, but it’s not impossible to overcome.

Cynthia has attended the Boys & Girls Clubs of Chicago for 11 years. It’s the place she credits with giving her a safe place to pursue her passions and make a difference.

Bullies regularly victimized Cynthia, crushing her self-esteem. So much so, when invited to join the fashion program at her Club, Cynthia was reluctant to say yes. The then-12-year-old didn’t think she was pretty enough or talented enough to be a part of the group. At the urging of a Club staff member, Cynthia agreed to give it a chance. Then she created a dress that won a fashion competition. That experience was pivotal in Cynthia regaining the confidence she’d lost.

Her personal understanding of bullying moved Cynthia her to develop the anti-bullying program she called MY VOICE. The program has two tracks: one for victims of bullying, the other for those who want be a force for change to stop bullying.

“Bullying can be difficult to deal with, but it’s not impossible to overcome,” says Cynthia. “Progress is a journey. And when I look at mine, I’m proud of how much I’ve overcome and that I’m able to help others find their voice.”

More than 250 youth at seven Boys & Girls Clubs in the Chicago area have since participated in MY VOICE.

Visit the MY VOICE website to learn more about Cynthia’s program.

Last summer Cynthia, 18, was named the 2018-19 Midwest Youth of the Year. Her participation in the program allowed Cynthia to advocate for millions of Club youth. She was also awarded $45,000 in scholarships by Youth of the Year national sponsors, Disney and Toyota.