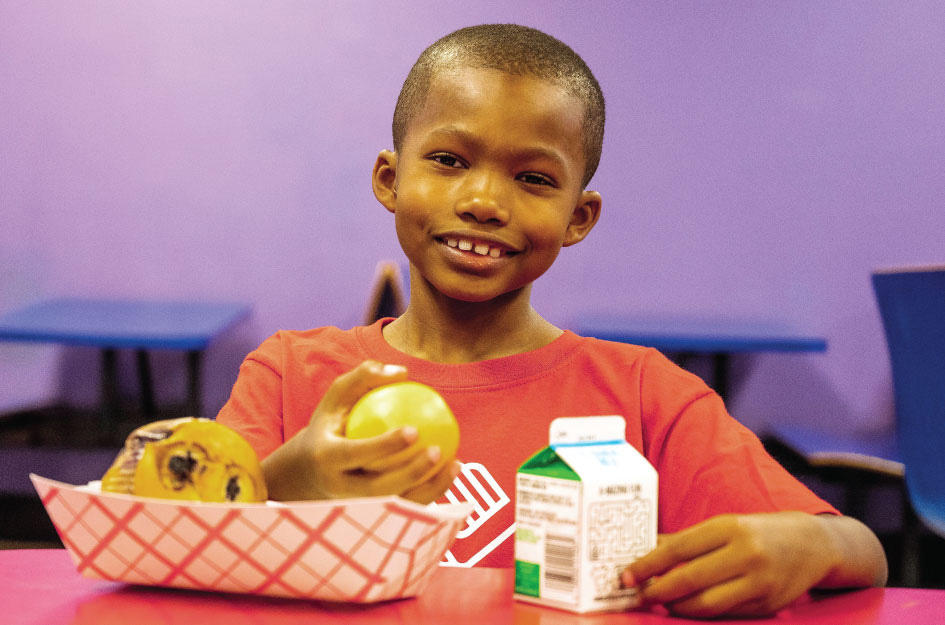 The Moment That Changed Everything: 8-year-old Inspires Dinner Program to Feed Local Children and Families
Posted 11/01/2021 by Boys & Girls Clubs of America in Youth Voice,Club Stories

Monica remembers the moment like it was yesterday. Schools were out, and a group of kids at the Boys & Girls Club were talking about food. She heard a young member, AJ, mention pasta, then tacos, then mac and cheese. It was nearly lunchtime, so she asked him what he had for breakfast that morning.

He responded, “Nothing yet.”

It was only Monica’s second week as the Charlotte County Boys & Girls Clubs’ director of development, but that was the moment she got the inspiration to start a dinner program.

Because many Club kids rely on their school for breakfast and lunch, they were going hungry when school was out — a need that intensified during the pandemic and is an ongoing challenge during the summer months when schools are closed. Even when schools are in session, school meals often aren’t enough for kids whose families struggle to afford healthy food for their families.

Monica met with the Club’s Executive Director Lynn to put their heads together. For a year, they planned and fundraised for what would become a dinner program they launched in 2019, where Club kids receive well-rounded meals they can eat together with their friends and caring Club mentors.


Whatever It Takes to Feed Kids

In the beginning, the local Club served hot, healthy dinners to 275 kids a day. Then the pandemic hit.

While the Club was forced to close in April and May 2020, the Charlotte County Boys & Girls Clubs team served meals drive-thru style. Families pulled up to the Club, rolled down their windows, and masked and gloved staff handed over hot meals in to-go containers. In two months, they served 4,733 meals.

“The lines were long,” Monica recalls. “But it was a rewarding feeling to know we were able to continue serving our community.”

During those two months of government-mandated closures, many community organizations were forced to cease operations. But the Club continued to live its promise: Whatever it takes to help our local youth.

“Instead of focusing on all the uncertainty, we focused on finding a way to keep caring for our kids in a way that would protect everyone’s health and safety.” Monica said. “That’s what Clubs do.”

Thanks to an outpouring of support, the Charlotte County Club opened their dinner program to the larger community, so those in need could request takeaway meals for their families.

As for AJ, the young boy who inspired the dinner program, Monica says, “He’s going places.” Now 10, he still regularly attends the Club and wants to work there when he is older, so he can stay at the Club forever.

“He wants to help families the same way we have helped him and his mom,” Monica said. “So, you really have touched someone when they want to do for others what you have done for them.”

Although uncertainty continues nationwide, the Charlotte County Boys & Girls Clubs’ meal program is a constant that families can depend on. And the Club plans to carry that momentum into the new year.


Give Kids Their Next Great Moment

Families and communities rely on Boys & Girls Clubs of America to give them the meals, mentors and meaningful life experiences they need to get through the toughest times and achieve their next great moment. With your support, great moments add up to great futures.