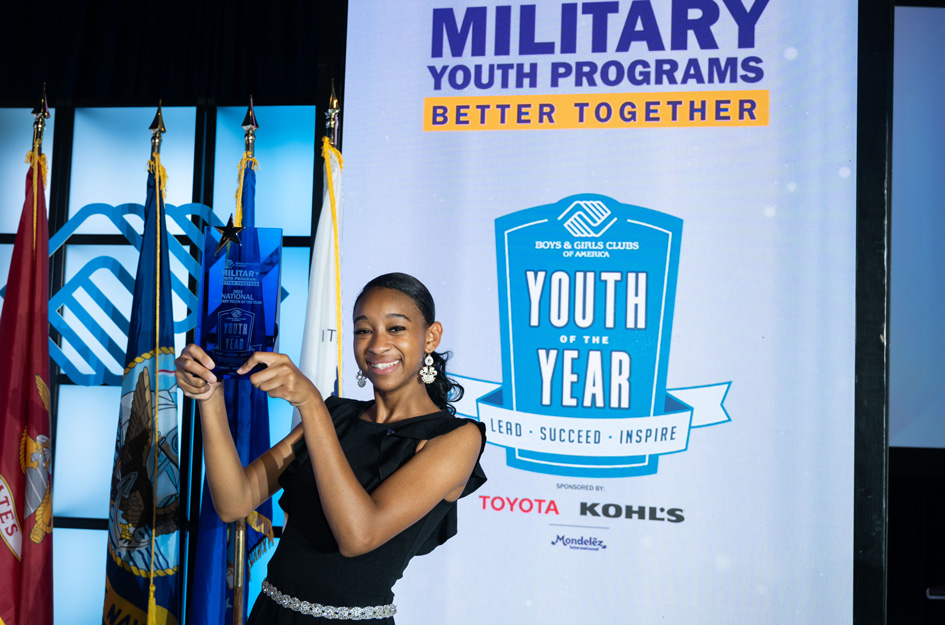 Ahsha B., of Kings Bay Naval Submarine Base has been named the 2022 National Military Youth of the Year by Boys & Girls Clubs of America.

During the annual Washington, D.C., celebration, emceed by American sports commentator and Boys & Girls Clubs of America supporter, Lewis Johnson, Ahsha was rewarded a $20,000 scholarship to support her future educational endeavors. This is in addition to the $22,500 in college scholarships already awarded to her at the state and regional levels of the Military Youth of the Year Program.

“For 30 years, we are honored to support military-connected youth, providing safe spaces, positive mentors and life-enhancing programs to help young people learn, grow and thrive,” said Jim Clark, president & CEO, Boys & Girls Clubs of America. “We are extremely proud of Ahsha and her achievements as we champion great futures for young people across the nation.”

After a move from Virginia to rural Georgia, Ahsha’s parents encouraged her to join the Military base’s Youth Center. She was less than thrilled.

“The first time I attended the Kings Bay Teen Center in January 2019, I did so begrudgingly,” Ahsha said. “I had no clue what to expect.”

Within two weeks of the program, a Youth Center staff member encouraged Ahsha to audition for a talent program through the Youth Center. She had the opportunity to perform an original spoken word piece and perform alongside a spoken word artist. In the same year, she was nominated as Boys & Girls Clubs of America’s East Coast National UPS Road Code Ambassador, which provided the opportunity to conduct safe driving workshops for teens. After these two major leadership milestones, Ahsha had the confidence to launch a podcast for teens at Kings Bay Naval Submarine Base, connecting directly with her peers.

“Immediately I began to build friendships and realized that this was not just a ‘program,” Ahsha said. “It was a place of growth and opportunity where I could be surrounded by people willing to invest in my success.”

Ahsha’s list of achievements has only grown since, becoming a member of several Club committees, locally and nationally. Perhaps the most profound experience for her so far has been participating in the ‘Whatever it Takes to Fight for your Voice’ series, which connected her with other young people of color.

“My experiences have shown me that the only limitations I have are the ones I place upon myself,” Ahsha said. “Through these opportunities, I have been surrounded by successful teens of color and other ethnicities, who have shown me the importance of not allowing others to define my limitations by the color of my skin. Seeing all these confident and successful teens made me become more confident in who I was as a person and revitalized the pride I feel for my culture, my unique gifts and talents.”

For 75 years, Boys & Girls Clubs of America has recognized young people in its Youth of the Year premiere youth leadership program, honoring extraordinary young people in their achievements in leadership, service, academic excellence and dedication to living a healthy lifestyle.

As the Lead Sponsor of Youth of the Year, Mondelēz International, will engage with local Clubs and Youth Centers year-round to help foster a new generation of leaders prepared to live in and lead a diverse global economy.

For more information about Youth of the Year, visit www.youthoftheyear.org.