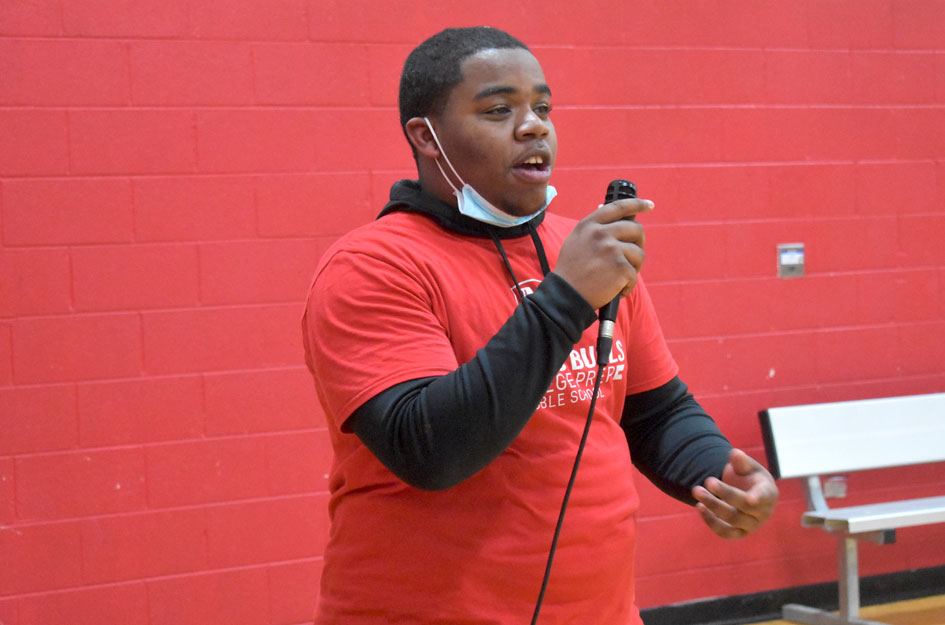 Jermaine, Club kid at Boys & Girls Clubs of Chicago, has been writing poetry and rap lyrics since his early days – and a poem he wrote at the age of 9 earned him top billing in Chicago’s Rooted & Radical Youth Poetry Festival.

In spring of 2022, Boys & Girls Club teen Jermaine earned his place among the top young poets in the Chicago area.

His winning poem? One he wrote at age nine. At that time, Jermaine was processing the loss of his cousin to gun violence and turned to pen and paper to express how he was feeling. The result is “Society,” his poem on the experience of being a young Black man in America.

“That poem was one of my first works,” said Jermaine. “I wrote [it] when I was in a dark space and music helped me calm down, helped me be myself and think about stuff differently… That’s why I think I was hanging on to it, because it was one of the realest things I ever wrote.”

Now in high school, Jermaine mainly writes rap, devoting hours to his music at the recording studio at his local Boys & Girls Clubs of Chicago.

When Kee Stein, the Club’s Early Literary Specialist, heard about Jermaine’s knack for writing and performing, she saw a natural spoken word poet. Stein herself is a professional poet working in spoken word and rap, previously working with the Young Chicago Authors program as well as the program’s Rooted & Radical Youth Poetry Festival. Formerly known as Louder Than a Bomb, the poetry festival was founded in 2001, with hundreds of students across schools and community groups participating in “Olympic-style poetry bouts, workshops and special events.”

Stein helped Jermaine hone his craft and submit his poem to the festival, where he went on to be selected as a Top 20 finalist in the competition, performing for a live audience at the finals at the DuSable Museum of African American History. Since becoming a finalist, Jermaine’s been invited back to participate in writing workshops and work with Young Chicago Authors.

“It’s difficult to put yourself out there, when you think about the content of his poem, talking about his experience navigating life as a young Black man in America,” said Stein. “But I was immensely proud that he performed like he never did before. He’s going to have so many more opportunities coming his way and already is seeing that.”

For Jermaine, Stein’s honesty and openness helped them connect. “Her mentorship is very inspiring and [I’m more easily open] to her than other people,” he said. “The importance of having a mentor is to have someone that helps lead you and guide you through the right paths and search for the pathway that you want to walk on through life.” 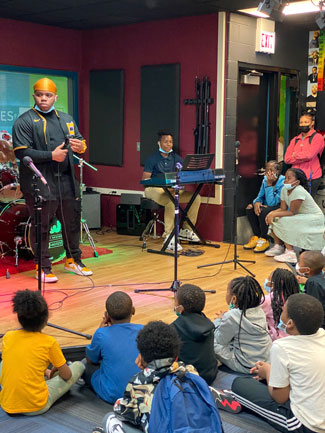 Jermaine performs music he wrote during the Club's End of Year Showcase in the James R. Jordan Club's Notes for Notes Studio in May 2022.
Stein hopes more kids find self-expression, confidence and healthy coping mechanisms in turning to the written word. For today’s teenagers, she thinks poetry can still hold its own.

“When I was their age, I used to think poetry was just a lot of dead white men using flowery language I didn’t understand," Stein said. “It’s so much more, it’s also rap, it’s also hip hop. If we can meet kids where they are and find new ways to express themselves, it’s so helpful and super necessary for them, especially at this moment in time.”

Jermaine intends to keep on writing, including spending time in the Club’s studio working on music and entering more competitions. “I feel freedom and at peace when I write music,” he says. “My words are my sanctuary that I can take anywhere, and my voice has a way of getting me a warm welcome everywhere I go.”


Join the Club
Boys & Girls Clubs of America provides mentorship, meals and meaningful life experiences to more than 4 million kids and teens annually. Boys & Girls Clubs are safe, inclusive places where kids learn, grow and have fun. Join us on our mission of helping all young people reach their full potential: