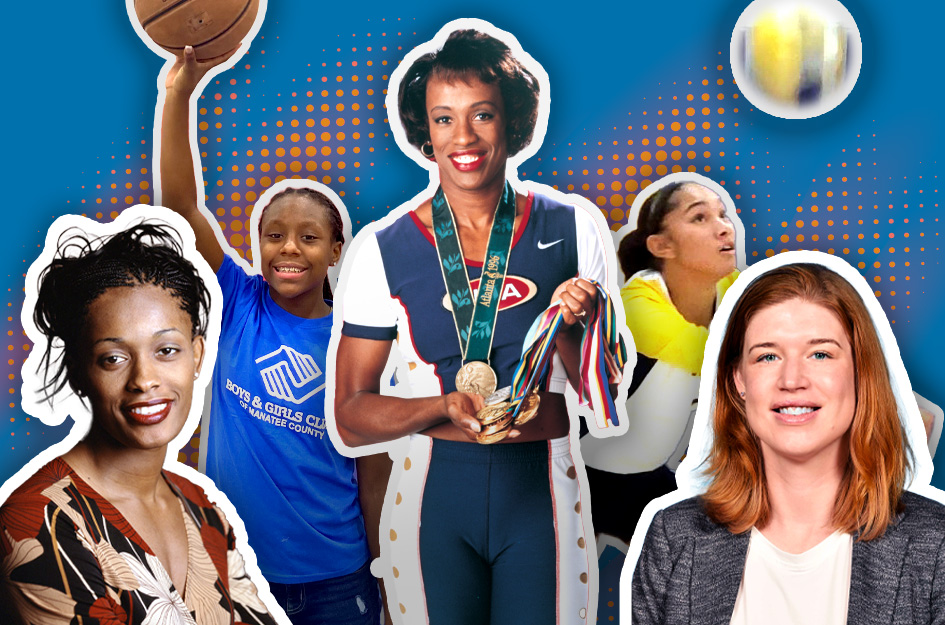 It’s the 50th anniversary of Title IX but girls and women in sports still have strides to make in getting more representation on the court and the field. Boys & Girls Club alumni like Olympian Jackie Joyner Kersee and today’s Club girls share their advice for empowering girls to get in the game.

Women have been underrepresented in sports for several years. Thanks to Title IX – which celebrated its 50th anniversary earlier this year – women have made huge strides in sports and have reached new heights on the court and on the field.

While sport opportunities have grown, the gender gap still exists.

According to Forbes, sports continue to be the most popular genre to watch on television, and the ratings of the NFL, NCAA Men’s Basketball Tournament, NBA Finals, and World Series continue to attract more viewers and ad dollars than other program types. Female sports are gaining more viewership and are being talked about more than ever before, but there is still a long way to go.

Tomorrow’s female sports leaders and athletes are the girls who get in the game today – and every girl can benefit from the social skills, discipline and leadership learned in a sport. At Boys & Girls Clubs, girls get active through a variety of sports programs like flag football, soccer, volleyball and more through our ALL STARS organized league and recreational sports programming.

We spoke to two young Club members who are deemed as sport icons at their own Clubs and several female leaders in sports who also just happen to be Boys & Girls Club alumni. Here’s what they had to say about getting girls into sports:


Why do girls not participate in sports?

“When you’re in a sport, you don’t want to come off as too ‘“boyish.’” As a society I feel that we forget that sports boost confidence and self-esteem. Being able to play a sport helps let out your emotions,” said 16-year-old Nashara E. from the Denver Broncos Boys & Girls Club.

Nashara’s been playing sports at her local club since she was a young girl. “It can cost a lot of money to play sports, but thanks to Boys & Girls Clubs and it being free, it’s been a lot easier gaining connections into sports. We also had a great support system, with mentors at the Club who were always there to motivate us.”

“Many people underestimate girls, so you just have to walk in there and show them what you’re all about. The All STARS program at my Club helped me become less shy,” said 12-year-old Kayla S. from the Boys & Girls Clubs of Manatee County. Kayla looks up to her athletic older brother and signed up for every sport he did. Along the way, she found out she’s a natural at basketball and also experienced being the only girl on the flag football team. “I wanted to be 10 times better than my brother, and I was not intimated. I would encourage other girls to give sports a chance.”

“One thing I would say to encourage young girls to pursue sports is something my mom used to say to me: ‘It’s okay to be the cool one that’s different,’” said Swin Cash, former professional basketball player, who played professionally for 15 seasons in the Women's National Basketball Association (WNBA). She currently serves as vice president of basketball operations and team development for the New Orleans Pelicans.

Former basketball player Becky Bonner is now the director of player development and quality control for the Orlando Magic. She had a similar journey when it came to feeling intimidated or feeling out of place. “I grew up playing with my brothers on the boys’ team up until 8th grade. What I can say personally from my experience was that it wasn’t popular to be tall and playing basketball with the boys on the court. Everybody knew about my brothers and how good they were, and they got a lot more opportunities to make more money too.” Being alongside her brothers, Becky felt that she had to work twice as hard to prove herself in basketball even though she was doing everything they were doing if not more. “Sometime females aren’t allowed to make mistakes,” she said.

Olympian and retired American track and field athlete, Jackie Joyner Kersee, is considered one of the greatest athletes of all time in the heptathlon and long jump, winning numerous medals at the Olympics, including three gold. Jackie grew up attending her local Boys & Girls Club when it used to be called the “Boys Club.”

Jackie shared how encouraging females and motivating them to not just sit around and watch the boys play is a way to help empower girls to not feel intimidated. “You have to be just as encouraging to the young girls as the boys. This is why youth development is so important and having leadership that is invested in making sure that girls are represented,” said Jackie. 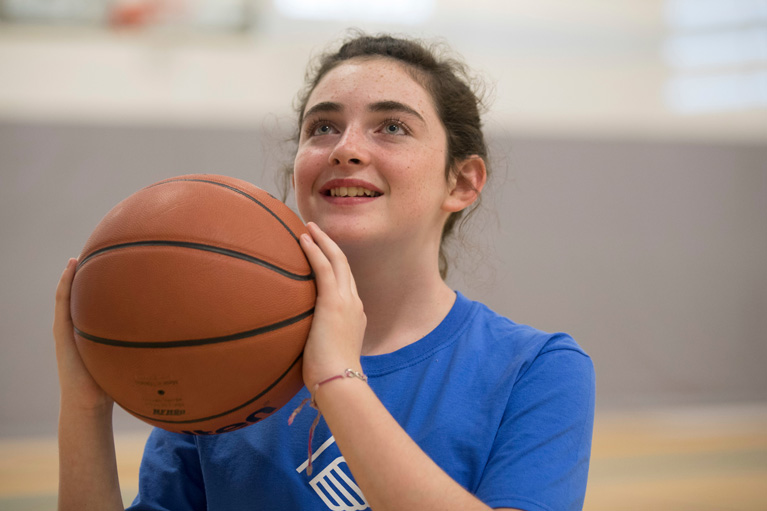 Why is it important for girls to be in sports?

The group of professional female athletes agreed on some major benefits of girls getting into sports, including building critical life skills like:


“I believe having access to a team sport was big for me,” said Swin. “It helped me with a lot of different social skills and helped me interact with people from different backgrounds. I also learned a ton of life lessons, whether it was figuring out how to win and lose, or how to have great sportsmanship. I encourage a lot of young women to participate in sports because it really helps mold you into a stronger leader, individual and makes you ultra-competitive (which is something I love!).”

Becky believes that sports create many opportunities to build yourself in ways you never even thought about. “It gives you the tools to push yourself, meeting a goal, working hard and learning discipline.”

Structure is another major thing you learn from playing a sport – if you’re supposed to be at training at 9 a.m., players know better than to show up later than that time. For girls, building these skills early can position them for success in academics, the workforce and life. “A lot of people say playing a sport builds character, but it also reveals character,” said Jackie. 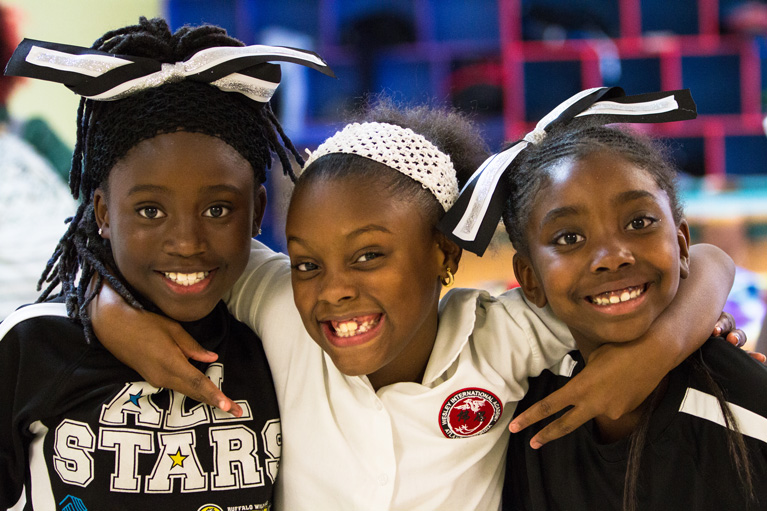 What does society still need to work on when it comes to girls and women in sports?

“One stride that we as a society can work on, especially as someone who is in the workforce now, is related to equal pay, investment, inclusion and empowerment,” said Becky, sharing the need for female leaders to look up to, such as coach Becky Hammon who led a WNBA team to a championship.

Nashara’s ready to see the fans come out and support women’s sports. She shared how hard it was when there was a football game the same day as her team’s volleyball game and more people showed up to support the football game. “Our coach always encourages us to keep up our energy,” she said, “because we know there’s some bias when it comes to male sports but always play your best no matter who’s watching.”

“There has been a lot of progress thanks to Title IX because many women before me did not get the same opportunities that I had, but I also feel that it’s important to note that we need men just as much as we need women. We need men to elevate women,” explained Jackie. Jackie feels that when women are not in those same circles of conversations, men should find ways to bring women to the table. “We need to continue to push women to be in those decision-making positions in order to see change.”

Boys & Girls Clubs of America’s ALL STARS program is sponsored by Buffalo Wild Wings, and works to ensure all young people have access to team sports, the pride of wearing a jersey and the ability to create lifelong skills on the field or court.