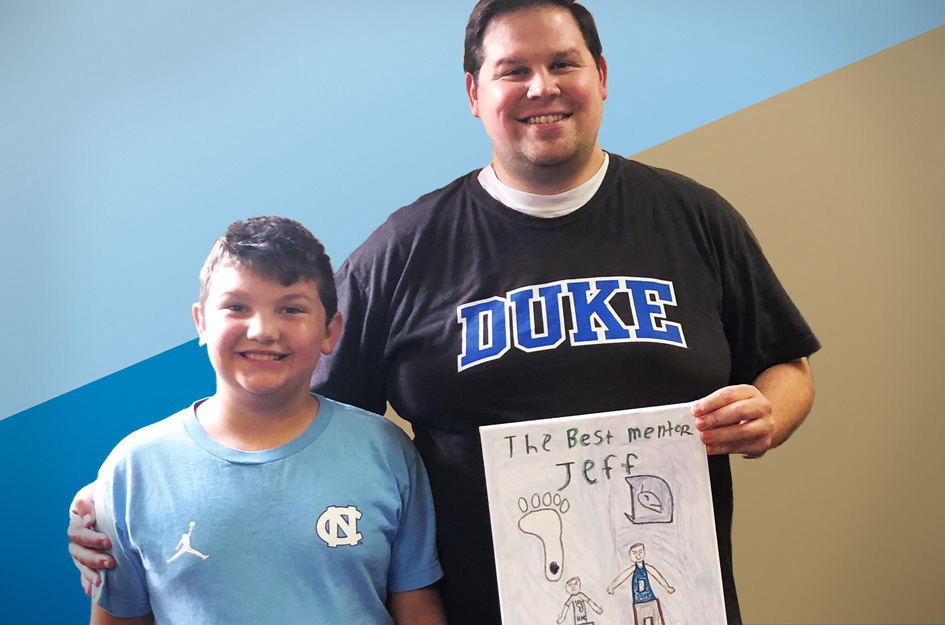 Mentoring programs are a central feature of the youth development initiatives at many Boys & Girls Clubs in Native Lands across the country. One illustration of the powerful impact of an effective mentor/mentee relationship is Wyatt and Jeff from the Boys & Girls Club of the Catawba Nation. Wyatt became a new member of the Club Teen Center in the summer of 2018, as a rising sixth grader. For the past several months, Wyatt and his mother have made the trek to the Club every morning from a small town 50 minutes away to participate in the mentoring program at the Club.

During this same timeframe, Wyatt has experienced notable shifts in his life. Wyatt is the youngest of the family, with his sibling being much older. Recently, Wyatt’s cousin moved into their home due to an extenuating family circumstance. This left Wyatt as no longer being the only child at home. Wyatt’s mother noted that he was struggling due to the constant comparisons being drawn between him and his newly arrived cousin.

Wyatt seemed a perfect fit for the start-up mentoring program at the Boys & Girls Club of the Catawba Nation. The Teen Center of the Club was recently moved to the tribe’s administrative offices, which opened an opportunity for tribal employees to mentor teens at the center one to two days per week. As is best practice, the Club reviewed potential mentors and mentees by their respective interests to best match them. In Wyatt’s mentoring application, he wrote that he loved World War II history, learning new languages, and playing video games. This made Wyatt a great match with the tribal attorney, Jeff, who is also a history buff and video game connoisseur.

The two instantly clicked, forging a strong bond by talking about their favorite college teams as well as popular hit Spanish songs, which allowed Wyatt to practice his Spanish with Jeff’s help. Wyatt returned the favor by teaching Jeff to play a popular online video game. Through the course of the mentoring program, Jeff was able to learn more about Wyatt’s day-to-day life, his goals of going to the Citadel and being in the military, and his struggle with having his cousin live with them, and his feelings about the changes in his life.

Having such an engaged relationship has been extremely helpful in promoting program consistency throughout the entire summer. Every Monday and Wednesday during mentoring programming, Club staff noticed Wyatt’s face would light up when Jeff walked through the door. Despite the changes and challenges of the summer, Wyatt was able to flourish and grow through his mentoring experience at the Catawba Teen Center.