Clubs offer high-quality programming that cultivates a love of learning and gives young people a solid support system and access to opportunities to make their dreams a reality.

When Boys & Girls Clubs of San Luis Valley needed help overhauling their antiquated computer network, they knew just who to call – Brandon D. The 15-year-old is a member of the Teen Tech Academy, a program co-founded by Boys & Girls Clubs of San Luis Valley and Alamosa High School that teaches computer programming and network design skills. Brandon began working on the project 10 to 15 hours each week in the summer, at first imaging the Club’s computers and eventually creating a plan used to rebuild the network infrastructure with program instructor Scott Schweizer. 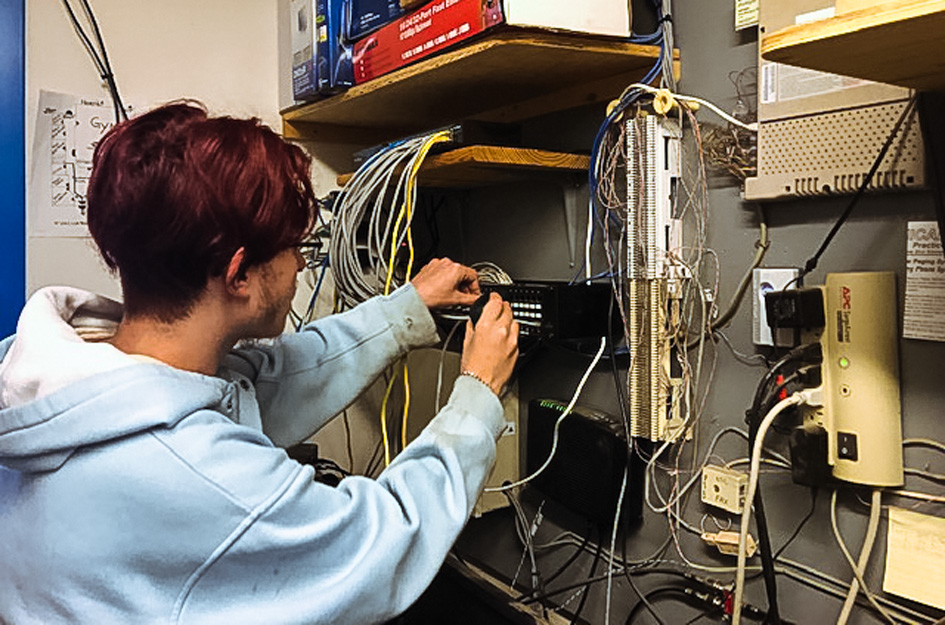 “One of the coolest things was watching Brandon grow in his self-confidence and his knowledge about network systems,” says Aaron Miltenberger, CEO of Boys & Girls Clubs of San Luis Valley. “Since he’s done that, Brandon has really found a place at the Club. Now, he has a regular group of friends that come in and talk about computers, and it’s opened up a whole new conversation with our teen members who can now see a pathway to working in tech.”

Nationwide, there are more than 1,000 local Boys & Girls Clubs in rural areas like Colorado’s San Luis Valley, which serves more than 500 young people within an 8,000-square-mile area. Exposure and access to opportunities like IT training are often scarce in rural communities where residents may not have access to high-quality internet, and higher instances of poverty make purchasing computers prohibitive.

“We are just getting faster internet in some of our larger cities in the valley,” says Aaron. “Access to the internet is an equalizer. There are families that don’t have internet or a computer at home, and there is an expectation from schools that students do homework on the internet. Many kids have to do their homework on a smart phone.”

Beyond digital access and equity, kids and teens growing up in rural areas face other barriers as well. Boys & Girls Clubs of San Luis Valley finds inspiration for innovative solutions that close the opportunity gap for youth in the grit and perseverance of the local community. One of those solutions, an outdoor adventure program funded by Great Outdoors Colorado, offers young people the opportunity to participate in a wide range of activities – from camping and hiking to summitting 14,000-foot Mount Elbert, the highest peak in the Rocky Mountains. The Club also utilized the grant to build a park next to its facility.

“A flip side to lack of access and opportunity is that it really breeds ingenuity and creative thinking,” Aaron says. “Rural communities get what needs to be done with what they have, and they are driven by a spirit of collegiality and collaboration.”

Glen Marshall, CEO of Boys & Girls Clubs of Rosebud, agrees. “There is a lot of strength in rural communities,” he says. “People take care of each other.”

“For us, our Lakota culture is a major strength,” Glen says. “Our Club members have a sense of connectedness to the lands of the Sicangu Lakota people, and we honor traditional dancing, arts and spiritual practices in our programming. We believe when a youth has a sense of identity – knowing who they are and who they want to be – it can act as a protective factor.”

The unemployment rate on Rosebud Reservation is around 80%, Glen says, and the local population experiences challenges with substance abuse, depression and other medical issues. According to Indian Health Services, American Indian and Alaska Native people experience a lower life expectancy and are disproportionately affected by disease compared to other Americans. For Native youth, those challenges are compounded by historical trauma.

“We are located in one of the most impoverished areas in the country, so when you talk about an economic base to draw from, it’s almost nonexistent,” Glen says. “Many parents don’t have phones, cars or jobs. Those factors limit opportunities for youth and the community’s ability to support economic drivers. We try to meet our families where they are and offer them a holistic program.”

One of the Club’s program offerings, the Sicangu Food Sovereignty Initiative, is supported by the Rosebud Economic Development Corporation. Children and teens are taught how to grow, harvest and prepare meals with traditional Lakota foods like chokecherries or timpsila, a wild turnip that can be ground into a fine flour for porridge or cakes.

Last May, the Club’s Little League team travelled to Arizona to compete in the Arizona Diamondbacks Inter-Tribal Youth Baseball & Softball Tournament. A few of the team’s members regularly walked 5 miles to get to practice at their Club and receive a hot meal. “The boys were able to get nutritious food and support from caring adult staff, which wasn’t necessarily something they received at home,” Glen says. “The experience of playing in the tournament opened their minds. It allowed them to see people, places and opportunities that they aren’t exposed to regularly.”

“Clubs are a catalyst for change, especially in rural areas,” says Carla Knapp, Vice President of Native Services for Boys & Girls Clubs of America. “They offer high-quality programming that cultivates a love of learning and teach young people to not only dream big, but also give them a solid support system and access to opportunities to make those dreams reality.”

“Geographically and economically – these communities are challenging,” Glen says. “The work being done by Club staff on Native lands, and in other rural communities, is a true testament to the mission of Boys & Girls Clubs of America by serving kids that need us most.”
Add your comment